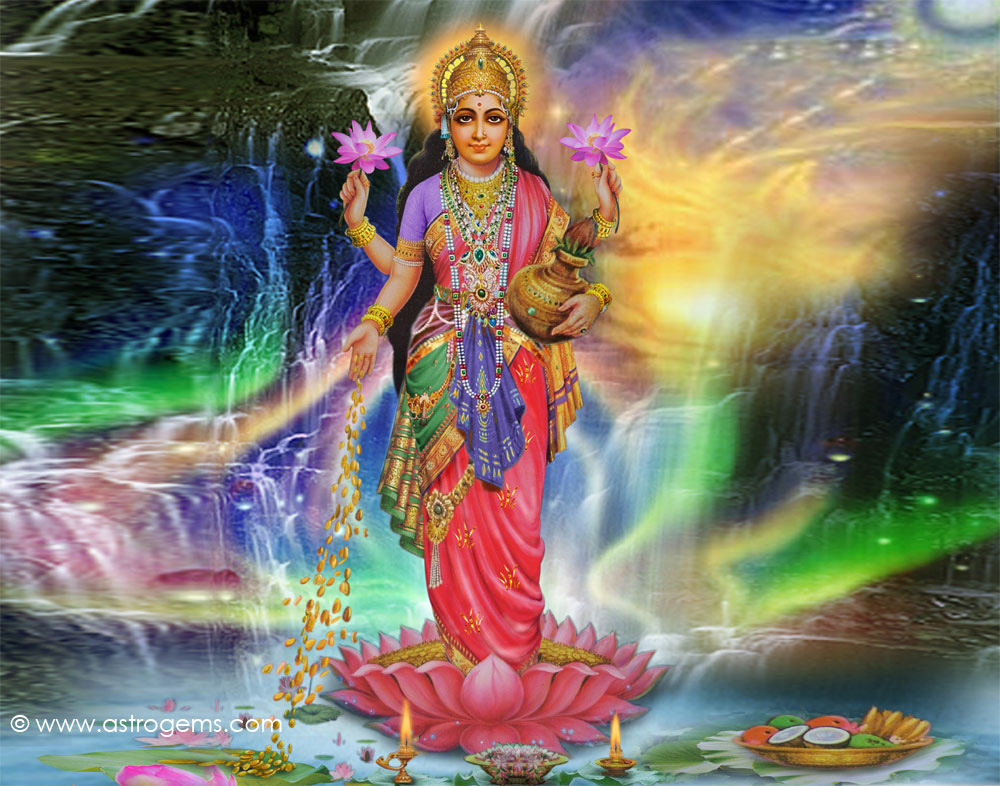 Lakshmi is the Hindu goddess of wealth, prosperity, love, fortune, and is considered the embodiment of beauty. She is the wife of Vishnu and carries his active energy. Her fours arms represent purusartha, or the four primary aims of human life: Dharma, Kama, Artha, and Moksha and representations of her can be found in many Jain monuments as well. In Nepal and Southeast Asia, Vasudhara mirrors Lakshmi with some minor differences. She is Vishnu’s source of strength while maintaining the universe.

When Vishnu incarnated on Earth, Lakshmi took form as Sita (when Vishnu became Rama), Radha (Krishna’s lover), Rukmini, and Satyabama. In ancient Hindu scripture all women are declared to be embodiments of Lakshmi. The marriage between Lakshmi and Vishnu is the paradigm for Hindu religious wedding ceremonies. Their relationship forms the basis for partnership in Hinduism.

Archeologists suggest that Lakshmi’s worship may have originated around 100BC. Statues and iconography have been dated from the second half of the first millennium CE. In modern India, Lakshmi is regarded as the goddess of wealth and Diwali and Sharad Purnima are festival celebrations held in her honor.

Lakshmi is another great example of a deity that evolved in the ancient Hindu texts and was mentioned only once in the Rig Veda as a kindred mark or sign of auspicious fortune. In the later Arthara Veda, she evolved into a deity with multiple incarnations and large amounts of plurality and is associated with good luck, good fortune, prosperity, success, happiness, and the good. Later, she is regarded as the incarnation of beauty, and the goddess of fortune and was associated with Vishnu. In later myths, she is associated with the creation of the universe, giving diverse gifts to many of the other gods (ie Indra gets force and Sarasvati receive nourishment). In the later epics, such as the Mahabharata, she personifies wealth, riches, beauty, happiness, loveliness, grace, charm, and splendor.

The word Lakshmi is derived from lakṣ (लक्ष्) and lakṣa (लक्ष) which mean to perceive, observe, know, understand and goal, aim, or objective. This together form knowing goals, or perceiving and understanding objectives.

Lakshmi is usually sitting or standing on a lotus flower and carries a couple in her hands which represent the ability to grow beautifully from dirty or filth in circumstances. She is also seen with elephants (symbolizes work, activity, strength, rain, fertility, and abundance) and an owl (symbolizes striving to observe and discover when surrounded by darkness, that also becomes blind in daylight, a reminder to refrain from greed and ignorance after knowledge and wealth is acquired).

In Eastern Indian traditions, Lakshmi is regarded as a form of Devi, along with Durga or Shakti. Lakshmi, Parvati, and Saraswathi are regionally considered to be from of Durga in West Bengal and Odisha, which are usually considered separate in India. She is the personification of spiritual fulfillment and is the embodiment of Param Prakriti, which purifies, empowers, and uplifts the individual.

It is obvious that Lakshmi represents an elusive and evolving subject of wealth and prosperity as well as the divine feminine aspect of spiritual energy. She is a powerful symbol in Hinduism and is worshipped often in modern India with statues and symbolism apparent in many of the places that I am currently near in Mysore. Her evolution is as interesting as her origins and I continue to find tremendous insight in the symbolism applied to her forms.